The Journal of Contemplative Inquiry

The Journal of Contemplative Inquiry (ISSN: 2333-7281) is an online, open access, peer-reviewed journal which advances the understanding, development, and application of contemplative and introspective methods in order to serve a vision of higher education as an opportunity for cultivating personal and social awareness and an exploration of meaning, values, and engaged action. The development of critical first-person perspectives and alternative ways of knowing allows everyone in higher education to examine their own experience in relation to the material they study, transforming their understanding of how their work, study, and actions affect the wider world. 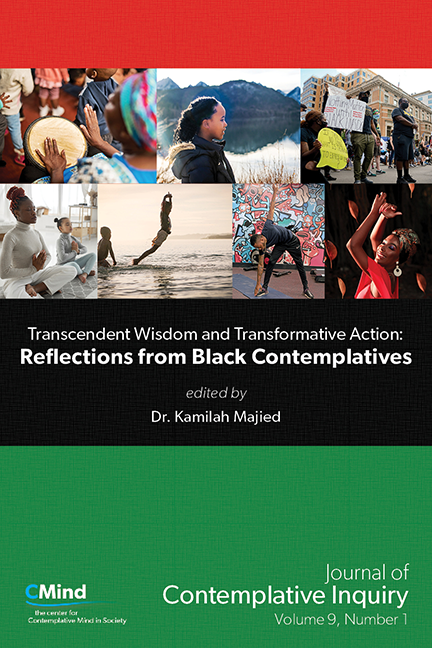 David Sable, PhD, is an instructor in Buddhism at Saint Mary's University (SMU) in Halifax, Nova Scotia where he has been teaching since 2000. In 2012, David completed the Interdisciplinary PhD program at Dalhousie University in Halifax bringing together the disciplines of education, psychology, and philosophy to study the impacts of applying mindfulness to pedagogical methods. His thesis titled, "The Impact of Reflective Practices on the Dispositions for Critical Thinking in Undergraduate Courses," was nominated for Best Thesis in the Social Sciences (2012) and his work noted in the National Teaching and Learning Forum 2012 (21(4)). In February 2014, a peer-reviewed article summarizing his research appeared in the inaugural edition of the Journal of Contemplative Inquiry. In November 2014 David offered the webinar/workshop "Developing Indicators for What Matters Most in Your Teaching" through the Association for Contemplative Mind in Higher Education web site to over 350 faculty members from six countries. David has also published several peer-reviewed journal articles (2005, 2009, 2011) on transformative learning as well as a chapter in a textbook on Transformative Learning in Online Education (2010). In 2016, David was a plenary speaker at the first mid-Atlantic conference on Contemplative Practices for the 21st Century University.

David draws on research-based mindfulness practices and applies them to listening, inquiry, and dialogue skills in the secular context of teaching and learning. The instructional design for all his courses includes the set of reflective practices used with students who participated in his doctoral research.

David was initially trained and authorized as a senior meditation teacher by the renowned Tibetan Buddhist teacher, Chogyam Trungpa. David has led numerous professional development workshops and residential retreats for teachers at all levels. Currently, David is working on a book for educators and trainers on the diverse impacts of reflective practices on learning.

Trudy Sable, Ph.D. has worked with and within Indigenous communities for over twenty-five years, liaising between government, universities, and the private sector on numerous projects. For sixteen years (2001-2017), she served as the Director of the Office of Aboriginal and Northern Research (OANR) at the Gorsebrook Research Institute for Atlantic Canada Studies (GRI), Saint Mary's University to work collaboratively with Indigenous communities to create culturally responsive educational programs and research projects. In this capacity, she has managed numerous innovative projects such as the Ta'n Weji-sqalia'tiek Mi'kmaw Place Names Digital Atlas and Website, the community-based Innu Nation Environmental Guardians Program, the Innu Youth film project, and the film Wi'kupaltimk: Feast of Forgiveness. A mainstay of all the projects has been the hiring of Indigenous youth researchers as a means to involve them directly in innovative and culturally relevant research while building their research capacity and skill sets.

Core to Dr. Sable's research over the past twenty-five years has been to create a dialogue between Western Scientists and Indigenous Knowledge Holders and Elders. As examples, she has worked with Environment Canada, Parks Canada, and the former Department of Energy Mines and Resources to develop research and educational programs looking at different perceptions and knowledges of the Atlantic Canadian landscape. She has written numerous reports and published internationally. Her book, co-authored with Bernie Francis, The Language of this Land, Mi'kma'ki, was shortlisted as the Best Scholarly book for the Atlantic Book Awards in 2012. Due to this work, she was appointed the first ever Director of Indigenous Education at SMU to assist the university in responding to the recommendations of the Truth and Reconciliation Commission's recommendations for redressing the horrors faced by thousands of Indigenous peoples who attended residential school. Her unique role was to "indigenize the academy" across all levels of staff, faculty, and students at the university specifically to create supportive conditions for emerging Indigenous scholars and incorporation of different worldview in teaching and learning.

Dr. Sable is an Adjunct professor of Anthropology as well as a Part-time teacher in the Atlantic Canada Studies program in which she developed and has taught the Indigenous Peoples of Atlantic Canada: Contemporary Issues course for the past eight years. She has published extensively and presented internationally on the implications of her work on cultural border-crossings for higher education, including at the Contemplative Mind in Higher Education conference on Social Justice at Howard University in Washington, D.C. She is a faculty member of the Atlantic Contemplative Centre relating to issues of diversity within Canadian society, particularly in the fields of health and education She is now is working independently as the CEO of her newly formed TGS Research Management and Educational Consultants. In this capacity, she is working with the Nova Scotia Museum and the Mi'kmaw Native Friendship Centre on a museum exhibit exploring the history of Urban Aboriginal Mi'kmaq, while continuing with projects in collaboration with the Innu Nation of Labrador and the Confederacy of Mainland Mi'kmaq.

We use cookies on our website to give you the most relevant experience by remembering your preferences and repeat visits. By clicking “Accept”, you consent to the use of ALL the cookies.
Cookie settingsACCEPT
Manage consent

This website uses cookies to improve your experience while you navigate through the website. Out of these, the cookies that are categorized as necessary are stored on your browser as they are essential for the working of basic functionalities of the website. We also use third-party cookies that help us analyze and understand how you use this website. These cookies will be stored in your browser only with your consent. You also have the option to opt-out of these cookies. But opting out of some of these cookies may affect your browsing experience.
Necessary Always Enabled
Necessary cookies are absolutely essential for the website to function properly. These cookies ensure basic functionalities and security features of the website, anonymously.
Functional
Functional cookies help to perform certain functionalities like sharing the content of the website on social media platforms, collect feedbacks, and other third-party features.
Performance
Performance cookies are used to understand and analyze the key performance indexes of the website which helps in delivering a better user experience for the visitors.
Analytics
Analytical cookies are used to understand how visitors interact with the website. These cookies help provide information on metrics the number of visitors, bounce rate, traffic source, etc.
Advertisement
Advertisement cookies are used to provide visitors with relevant ads and marketing campaigns. These cookies track visitors across websites and collect information to provide customized ads.
Others
Other uncategorized cookies are those that are being analyzed and have not been classified into a category as yet.
SAVE & ACCEPT
Scroll To Top